skip to main | skip to sidebar

I figured I would start this blog from home base, literally, and do the first Vintage Vancouver profile post on my home, the Holly Lodge. Now, I've done a lot of research on the Holly Lodge because about 5 years ago I thought I would write a play about one suite and all the people who lived in it from 1912 - present. Not a terrible idea, but the resulting first act was so utterly, ridiculously bad that I'm hanging my head in shame as I write this. But I kept the research in the hopes that one day I would put it to good use. So:

The Holly Lodge was built in 1912 by the architectural team Wright, Rushforth and Cahill, who were based in San Francisco and who also built the San Francisco City Hall, among other buildings up and down the West Coast. Here is the original proposal illustration: 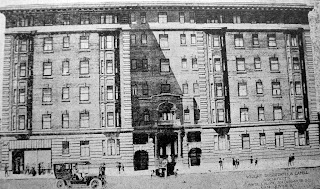 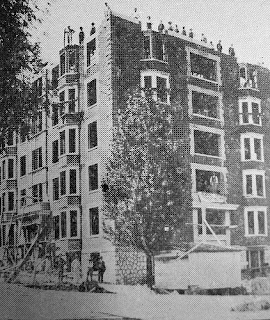 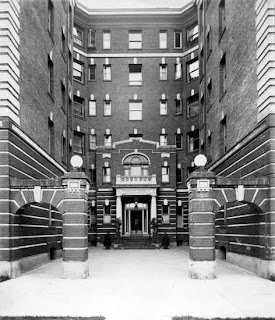 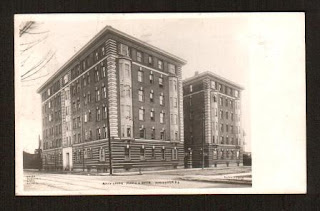 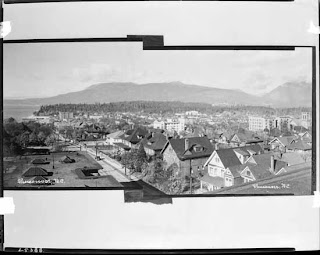 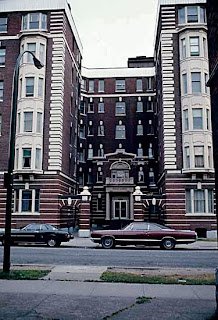 The Holly Lodge was built at the intersection of Davie and Jervis streets, which would have had an impressive view of English Bay and First Beach. It was the tallest building in the West End for decades, standing at 6 storeys when most apartment buildings stood at 3.

At this time the West End was the most fashionable neighbourhood in Vancouver and home to the very wealthy. The HoLo held court among some of the most sprawling, extravagant mansions on the West Coast, including Gabriola (also known as the B.T. Rogers sugar mansion for its owner) and Hendry House.

Its bachelor, 1 and 2 bedroom apartment had gas stoves, hot water radiators, coal burning fireplaces (in the larger 2 bedroom suites), high ceilings, bay windows, hardwood floors and dumbwaiters. The intended design and layout of the apartments have not changed since its completion.

At some point in its history (I don't know this for sure but I'm thinking somewhere around the 1960s) it fell to neglect, and as a result it's not in great shape today, being too large and too costly to fix completely. That is what I like about it. The great thing about historic houses and apartments that have not been renovated is that the guts are all original, nothing has been done other than what was originally intended. It's not falling down, but the floors are scarred and the walls are cracked - it needs a makeover. During wind storms, like the one last night, the unsealed windows in my my suite make a noise like a long, satisfying fart eased out by your Grandpa during Thanksgiving dinner.

It would be very hard for me to leave. It would have to be a seriously kick-ass house or apartment that could get me out of the HoLo. My friends are here, I can walk to work, and I love this neighbourhood, and while those are all great reasons in themselves, there is more to it than that.

I've tried to put my finger on what it is about antique homes and objects that has held a fascination for me for so long, and I think it has to do simply with access to a time that is not my own. It's not life as I have always known it. I'm allowed into a different world through studying how people used to live and what they chose to use and wear every day. These things bring me closer and I like being closer. There is an intimacy in walking in the same home and using the same china and rolling pins, jewelry and recipes. I have no idea how many people have lived in the Holly Lodge or in my suite and it's not for lack of trying. There has been so much turnover in 98 years that I suppose it's impossible to know. I love the specifics, but I also enjoy the unanswerables. For some reason I equate this to feeling at home.

(photos courtesy of the City of Vancouver and Vancouver Public library archives)
Posted by Jessica at 1:41 PM

Jessica
Just a dirty broad cooking for one. crasscuisine@gmail.com